Helping people across the globe reset their relationship with alcohol

The app that's helped over 250k people reduce their drinking, improve their health and their relationship with alcohol. 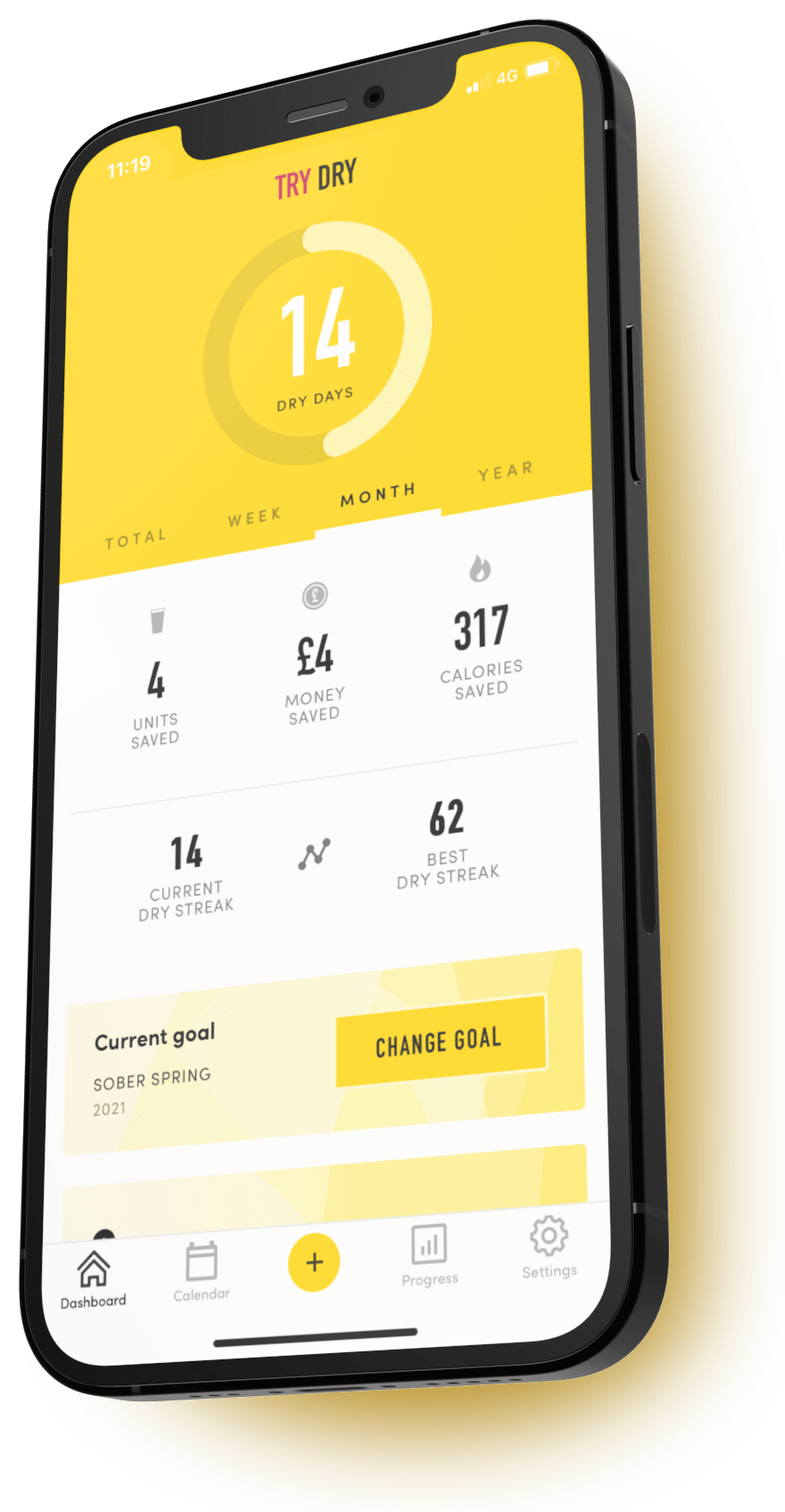 Dry January is the UK’s annual 31-day challenge through which millions of people go alcohol-free for the month of January. Run by the charity Alcohol Change UK, Dry January helps people reset their relationship with alcohol and drink more healthily year-round.

Dry January leads to deeper sleep, boosted energy, and money saved. Research also shows that a month off alcohol lowers blood pressure, cholesterol and diabetes risk, as well as lower cancer-related proteins in the blood. Alcohol costs the NHS £3.5 billion a year and a staggering 1.26 million hospital admissions are related to alcohol consumption every year. Alcohol Change UK’s mission is to create a society that is free from the harm caused by alcohol.

Alcohol Change UK approached us to create a mobile application to enable participants to track their drinking habits throughout January and beyond. The app need to be easy and a delight to use, engaging users and highlighting the financial and well-being benefits of  drinking habit changes. Giving people the best chance at changing their relationship with alcohol.

Most alcohol apps only support sobriety, where one drink ‘resets the counter’, demoralising many users and leading them to give up.  Inclusivity was a key requirement for the new app, Alcohol Change UK recognises that planned, controlled drinking is a valuable outcome for many and wanted an app that was accessible and useful to all.

We are thrilled to announce that our life changing app for the brilliant Alcohol Change UK, Try Dry has been shortlisted for a BIMA 10 award.

We created Try Dry the free, hybrid mobile app, to help people keep track of their drinking and reduce their alcohol intake throughout January and beyond. The app was developed using Ionic, the award-winning hybrid framework. Using just one codebase to service both iOS and Android devices.

Try Dry provides a user-friendly and intuitive way to:

The app is completely free and can be downloaded from the Google Play store and Apple’s App Store. 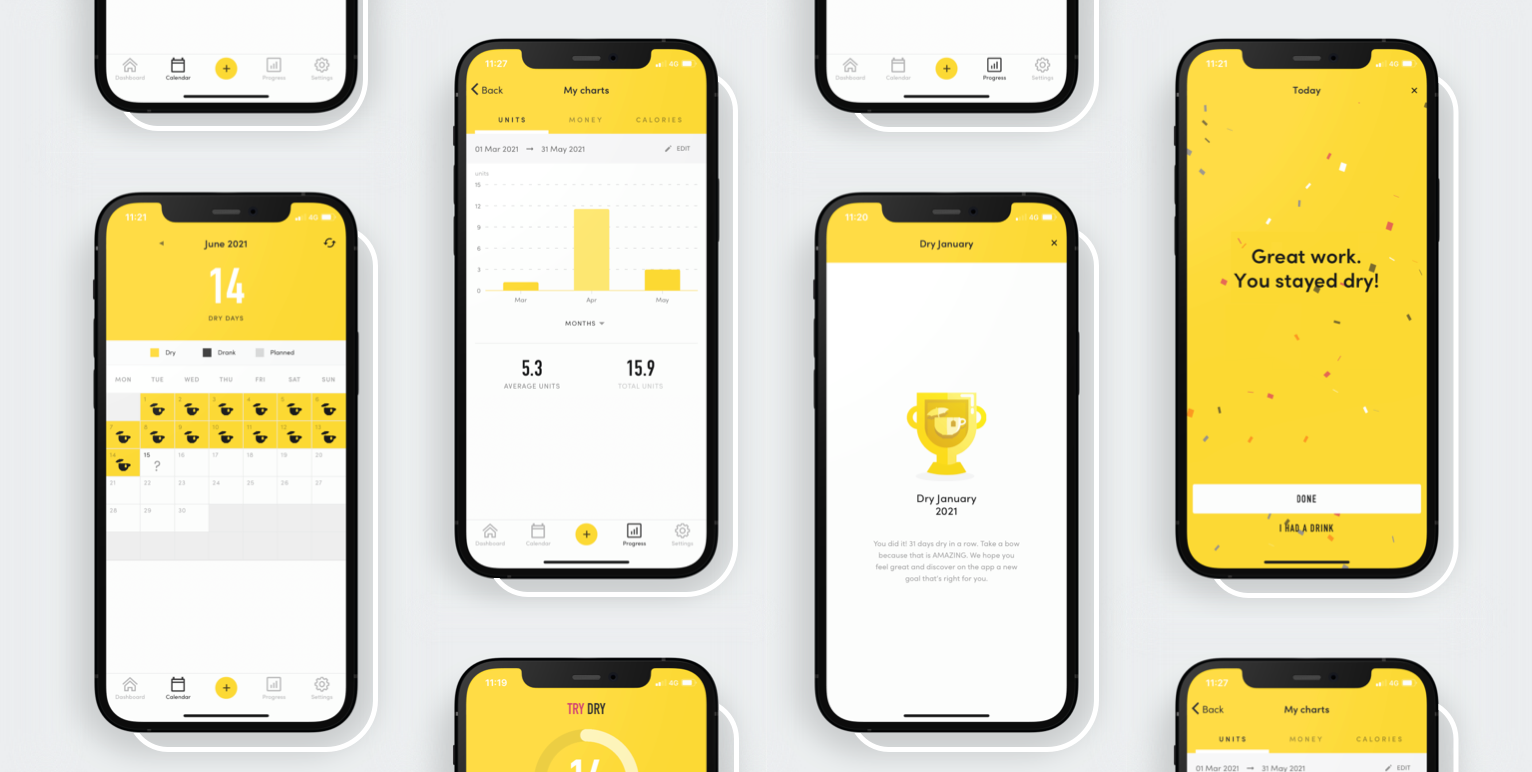 We worked closely with the team at Alcohol Change UK employing an agile, iterative process to product development. This enabled us to quickly make decisions as a team about what features would add the greatest value within the app.

Relying on rapid prototyping we were able to test and evaluate functionality prior to build, reducing unnecessary changes late in the process. User feedback We were inspired from the start by the online Dry January Facebook community. The achievements, struggles and ideas of the members of this community drove the initial design and functionality of the Try Dry app. They continue to fundamentally shape new features, improvements and the development of the app. We recently launched ‘Missions’ a set of badges that users can claim for events, occasions and personal events. These include Birthday’s, Weddings, Christmas and music events. Providing users with a reward for staying dry in different situations. Using user feedback to drive and prioritise the functionality of the app, ensures that every release is helpful and engaging. Creating something that’s used beyond January and makes a lasting change to people’s lives.

Try Dry had to be useful. The gamification throughout celebrates your achievements: awarding badges for reaching goals and milestones; as well as celebrating small wins, like staying dry for a day. The real-time dashboard highlights progress made with animations that count totals every time. These animations elevate the experience, encouraging users to return and keep on track.

Try Dry uses familiar gamification and animations tools from lifestyle apps like Fitbit, Strava and the gaming industry. Users can celebrate big milestones and little wins, and receive badges for a wide range of goals. This keeps them accountable – and motivated – long-term. Try Dry has become a part of many people’s lives:

“Everyday, I can’t wait to add my teacup.”
Jo, Solihull

Encouraging users to use the app daily was key to encouraging long term behaviour change. Traditional nudge techniques used in behavioural change were adapted into the app as flexible, friendly daily notifications to encourage people to log their drinking if they haven’t, generating a significant positive ‘nudge’.

We continue to develop the Try Dry app to improve the experience of users, adding new and useful functionality. Continuous improvement is key to the success of any digital product and ensures frequent use and sustained engagement.  Through regular sprints we are able to define, develop and release new features and improvements quickly to the Try Dry community.

Rareloop were a great partner in the creation of our new Dry January app. They gave us excellent project management, a development process that met our incredibly ambitious timescales and top quality work. They were also positive, accommodating and nice people to work with.
Richard Piper, CEO - Alcohol Change UK

The impact of Try Dry, the Dry January app

Since we launched Try Dry, the app has been downloaded by over 250k people, collectively they have saved over 42m units of alcohol and over £30m.

Try Dry is now used by thousands of people across the world to set their own goals, hold themselves accountable, and inspire themselves to cut their drinking, consume fewer calories and save money, all year round.

The app doubles your chance of staying dry during January and an incredible 67% of people reduce their drinking long-term. Aimed at harmful drinkers, on average it cuts their consumption 84%, taking them into the low-risk drinking category and having a positive long-term impact on their wellbeing, health and relationships.

Try Dry has a truly global reach, and is used in over 170 countries, and is now used by a number of international partners. It is also being considered by WHO as a global campaign.

Alcohol harm affects everyone, so it’s a privilege to have created a world-leading app that can create global change.

Try Dry has a huge impact on people’s drinking habits and long-term relationship with alcohol. In turn, this significantly improves people’s physical and mental health, wellbeing and relationships.

The insights from the community highlight the true impact the app has on people’s lives.

Hugh’s story was featured on ITV’s Tonight show – Are we drinking too much? in July 2021 and on the Dry January blog. He wrote:

“Before the app, I can’t remember the last time I didn’t have a drink for three days in a row! Now, with the app, it’s a challenge which is rewarded. OK, so the reward is just a badge BUT the bigger reward is that my wife and I do it together and are supporting each other to have more dry days. Previously, we would both vouch to have a dry day, for one of us to break it… which gave the other ‘permission’ to break it too! Now we stick to it and we’re getting healthier together.”

Try Dry is a powerful big data tool, producing a large-scale, anonymous data-set of baseline drinking, drinking patterns and behaviour change. We carefully planned the data capture early on, creating strong foundations for growth. We integrated the globally recognised and validated AUDIT-C tool to capture drinking risk. This data is now used by leading academics, universities, healthcare professionals and local authorities to support their research and alcohol change goals. Local authorities are also working with Alcohol Change UK to adopt the Try Dry app, rather than creating their own.

If you’d like to talk to us about how we could support you to create an app that has lasting change. Get in touch. We can’t wait to hear more!